I’ve got the fever. Fall fever, that is. I went for a jog the other day and I swear pumpkin spice was coming out of my pores. That might not be entirely accurate, or scientifically possible, but you get the idea. What I need is a good, apple beer soup!

One of my favorite things about fall is the food. Remember how I said I may have food issues? Well its especially apparent this time of year. Tasty treats, soup, and crusty (gluten-free) bread are at the top of my Tasty Nom Noms list. I do love me a good list.

My mother in law, Diane, is perhaps one of the BEST cooks I have EVER had the pleasure of knowing. Not just because she makes tasty treats for me to shove down my gullet, but she is also an amazing, kind, funny person. I’ll keep her around.

This soup recipe is actually adapted from one of her recipes. I did very little tweaking to it. I mean, why mess with a good thing? Well, I did mess with it, but only to make it gluten-free, but it’s still so….darn…..good! I mean cheese and beer? Hello! Can you really go wrong?

Real talk. I may have had a situation occur while making this. Without getting into details, lets just say it’s never a good idea to NOT set a timer when you have something in the oven. It’s not good. Bad things happen like smoke and things that are not raisins, start looking like raisins. Major fail.

Other than that little…ehem…misstep, it’s a pretty straight forward recipe. I recommend doing all the prep ahead of time, because it comes together pretty quickly. Also resist the urge to eat all the shredded cheese while you’re cooking. If you are notorious for stunts like that, maybe give yourself a “cheese buffer”.

The crumble can be made ahead of time, and to avoid situations such as the one I ran into. It’s generally a good idea.

I should also state, for the record, that I used walnuts in lieu of pecans (I was being super cheap), and also used unsweetened almond milk instead of regular milk. The latter there was still tasty, but I think this would be best with good ol’ whole milk. I used the almond just to be sassy. Well, I also forgot milk at the store so that played a part in it too.

Well, without any further ado, here it is in all of its gloriousness!

That’s it for today,everyone! If you want more recipe ideas, make sure to subscribe/follow as I try and post at least a couple times per week.You can also follow me on Pinterest , Instagram or Facebookfor more tasty treat ideas as well! 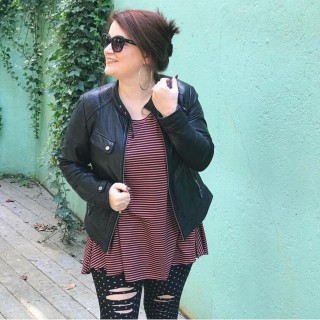 Hi! My name is Leah and I currently live in the PNW with my husband, two cats, and our dog. I am a full time blogger (#petmomboss) who loves fashion, food, fun and travel. My goal is to make you laugh while sharing helpful tips, recipes, and ideas that make your life easier and make you happier at the same time.